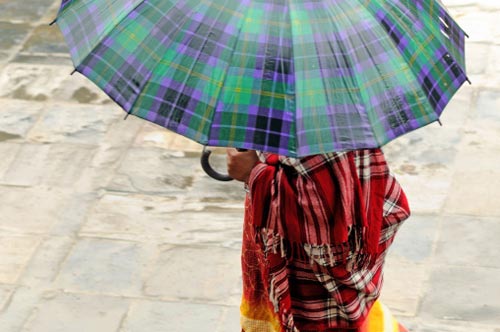 “kanchi lai ghumaune Kathmandu sahara…” the loud song used to excite Harka Bahadur. He had spent his youth in a rural village where he dreamed of settling his Kanchi and his kids in a big city. It was now five years that his family had migrated to the Kathmandu dreamland… He had thought he’d never return to his village but time and again he was compelled to return just to get fresh air. Kathmandu is no longer his dreamland, he now thinks it a rotten city. He is irritated by the dirt and dust but he stays for his kids.

A few days ago, he quarreled once again with a neighbor for water, one of them overtook the queue! He felt frustrated, looking at the sad faces and swollen eyes of his kids (who couldn’t complete their homework because of the disturbance) and wife. It was not the first time but he couldn’t take it anymore.

Harka Bahadur travels to his office every day in his two-wheeler. The sea of vehicles in the concrete city generate ear-splitting noise and smoking dust, then there are the piles of dirt and open sewerage – the so-called divine river – that he has to cross through. It is enough to ruin his mood and additional comments from his boss would be unbearable, so he leaves for work at 8.30 though he starts at 10.

Today, as it is raining heavily, he is covered with mud when he arrives. Other staff laugh at him…not because he is dirty, but because they know what he’ll do next. They had seen him bathe in the office a number of times…today he would do the same.

Sitting at his chair, he thought, “What will Kanchi do today?” She will visit neighbours, not to meet them but to wash dirty clothes. That would be her plan, otherwise their kids would not be able to go to school as they had no more clean clothes. If that didn’t work, he would have to buy water (which is really unaffordable).

His left the office early, thinking his wife would get home late from the neighbours. But when he got home, she was all smiles. Due to the heavy rain, his kids hadn’t gone to school so she hadn’t gone to the neighbors to wash. She told the kids to read but they went out to play in rain. When she looked, she couldn’t believe their game: turning an umbrella upside down they were collecting rain water and carrying it inside. She rushed to the kitchen and brought out all the big empty pots. With the water they collected, she had washed all the clothes and there was sufficient left over for them to bathe.

They were very happy and went to sleep early. He planned to wake at dawn to rush to the Rain Water Harvesting service providers to have one installed whatever the cost….