Rain on the surface of the sea 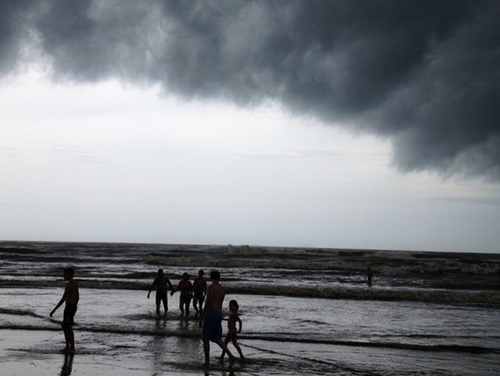 Hello , my name is Andrezza Nascimento. I am from Porto Alegre , Rio Grande do Sul, Brazil, and I’m in Public Relations.

I would like to share with you something that I experienced on 31 December 2013, on the Capão da Canoa beach, which is about 120 km from my city. On this day, after long days of sun and heat, the weather began to change. First we heard loud and frightening cracks of thunder getting closer and more intense, it was really scary. The clouds rolled in and it was black, heavy, dense...

People came stampeding from the boardwalk - some slowly, others more rushed (after all, storms are not very secure). My family was at home and when the rain began to fall – it was loud, noisy and burly. Me and a family friend looked at each other and I said: Let’s bathe in the rain and go into the sea, because it will be warm.

We opened the gate and faced the sharp and icy drops. We ran like we were trying to escape from something, but with feelings of joy, freedom, cleansing ... We arrived by the sea, and to our surprise, it was not empty. Other people had had the same thought and they were having fun, the hard, cold raindrops transmitted an immense feeling of serenity. Children kicked puddles of water in each other and the adults felt as young as them. We both ran to the sea and plunged in. I remained submerged for a few seconds just listening to the sound of the rain on the surface of the sea. It was a sublime moment of peace and satisfaction. Just a few adventurous people had the idea to do this, but more should try.