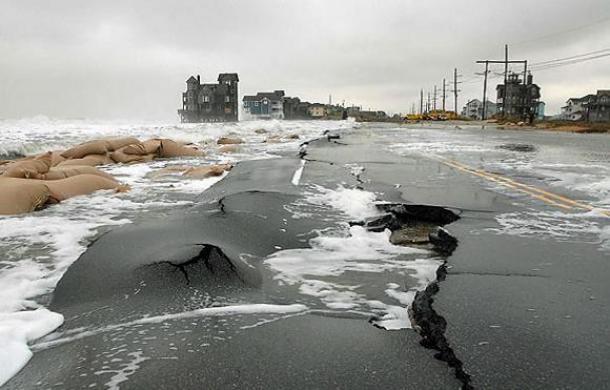 When a tropical cyclone (also known as a hurricane) makes landfall, we often hear initial reports of the damage from associated high winds. But in coastal areas, storm surge is often the greatest threat a hurricane or other extreme storm poses to life and property. Globally, storm surge events have been responsible for millions of deaths, and billions of dollars worth of damage.

What is a storm surge?

A storm surge is an abnormal rise of water generated by a storm. Extreme storms such as tropical cyclones and nor’easters bring strong winds and heavy rains. The winds drive large waves and storm surge onto shore. This effect is different than a tsunami – a giant wave caused by earthquakes or volcanic eruptions under the sea or landslides into the sea.

What happens during a storm surge?

Storm surge is produced by the force of winds swirling around a storm, pushing water toward the shore. The depth of a surge can rise very quickly — from centimetres to a metre or more in a matter of minutes. One cubic metre of water can weigh one ton, so we can imagine the destructive potential of a surge carrying thousands of tons of water - often including large debris such as trees - onto the shore. A surge not only threatens the shoreline, but can also move many kilometres inland, over land and through streams and rivers.

Storm surges are extremely dangerous because they are capable of flooding large coastal areas, causing severe devastation. It is important for those living in areas prone to surge to learn about how it happens, and what to do when it does. See the links below for ways to explore storm surge with students.