Fire in the sky 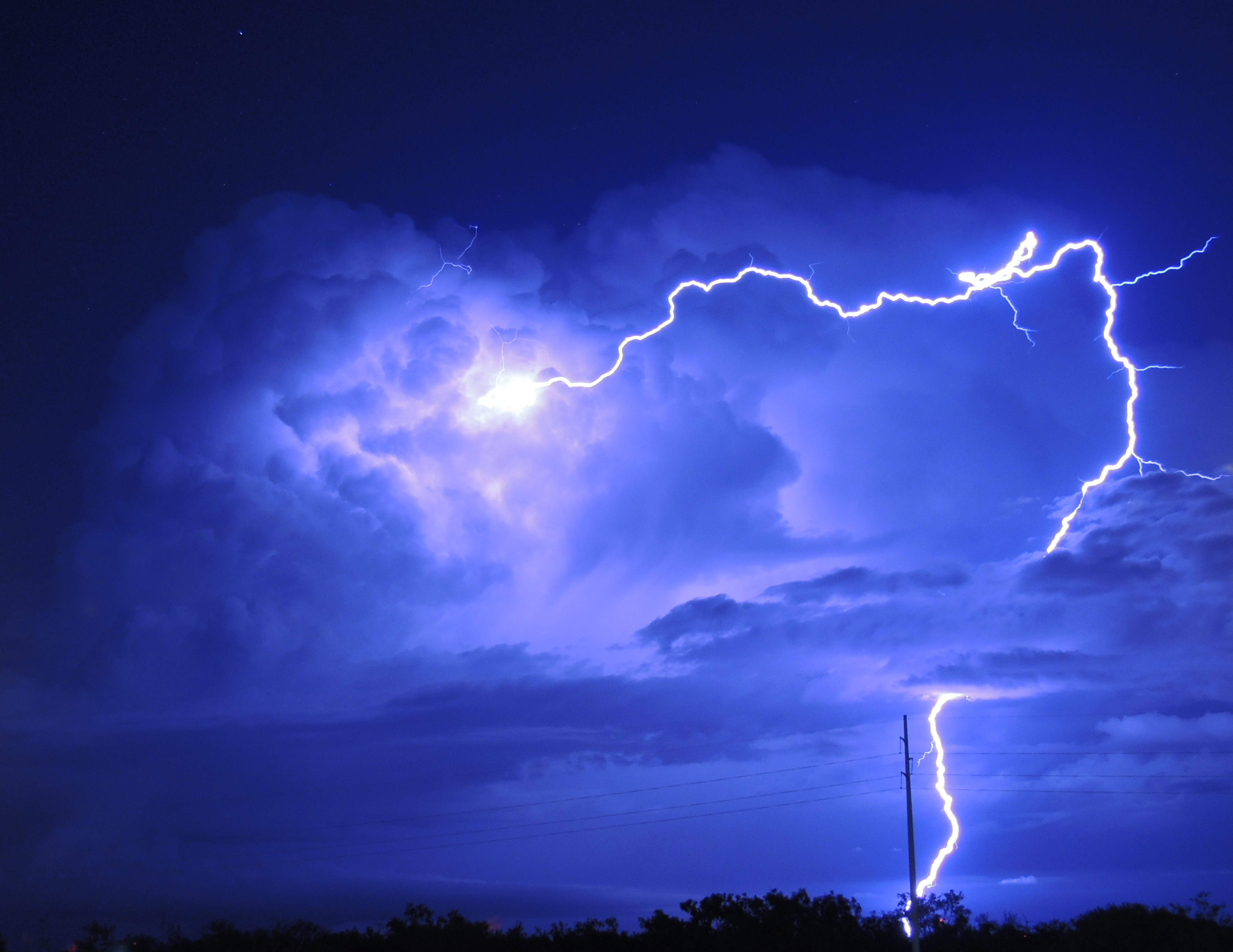 © Mitchel Coombs/NOAA Photo Library
Lightning has intrigued and baffled humans for thousands of years. It was believed to be the weapon of choice for numerous figures in early mythology and religion such as the Greeks’ Zeus, the Scandinavians’ Thor, and the Hindu storm deities known as Maruts. We now understand the scientific basis for what causes lightning, but it remains a mysterious and often dangerous phenomenon.
Lightning is not created by celestial deities, but how does it happen? The formation of lightning requires both cold air and warm air. The warm air rises, cools and condenses, producing clouds. Inside the clouds, water droplets in the warmer air and tiny ice crystals in the colder air bump into each other, and the friction creates static electricity. Like a battery, a storm cloud becomes polarized, with positive charge (protons) building up at the top of the cloud mass, and negative charge (electrons) at the bottom. The electrons gathering at the bottom of the cloud repel electrons from the Earth’s surface beneath, creating a collection of protons that will then attract the electrons in the cloud. The connection of positive and negative creates an electrical discharge that we see as lightning.
While we have come a long way from the early mythologies in our understanding of lightning, scientists are still learning about how it works. It is not yet possible to predict where and when lightning will strike, but research aims to improve understanding of its dynamics, in order to protect people from harmful or deadly strikes. An interesting result of improved remote sensing techniques is the recent ruling by WMO of the longest reported distance and longest reported duration of a single lightning flash. A WMO committee of experts evaluated and confirmed the two world records: the record for distance was a horizontal distance of 321 kilometers (199.5 miles) over Oklahoma, U.S.A. in 2007; and the longest reported duration of a flash, over southern France in 2012, was 7.74 seconds.
These are more than just interesting facts – information such as this is used to better inform public safety efforts. For instance, many of us have learned various methods of gauging the distance between ourselves and a flash of lightning, in order to decide when we should seek shelter. Knowing that a single lightning flash has traveled up to 321 km/199.5 miles, it is clear that there is not a “safe” distance at which one could remain exposed in a storm. The advice from experts is now much more simple: “When thunder roars, go indoors”.
Additional information and educational resources:
Lightning Myths and Facts from U.S. NOAA
Lightning info from the UK Met Office
Introduction to Lightning from the U.S. NOAA National Weather Service
The Science of Thunder and Lightning from Hong Kong Observatory
What is Lightning? Lesson plan from the British Council
Thunder & Lightning lesson plan from the Irish Meteorological Service