El Niño – A little boy causing a lot of problems! 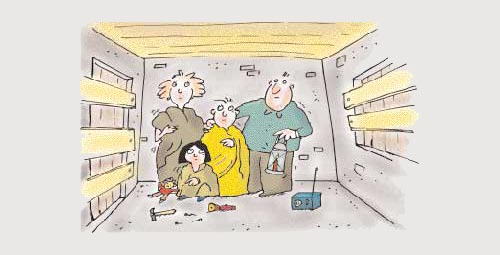 My name is Esteban and I live in Ecuador. Barely a week ago, it was a hot, heavy day. It felt as though I was walking through steam or moving through wet cotton. My friends and I tried to play ball, but we just could not. When my friend Marco kicked the ball out of the playground, no one ran after it. It was just too much of an effort. Even standing still, we were too hot.

At about 3 p.m., we all decided to go home. The streets were empty, and the sky was clouding over. It must have been at least 40°C in the shade! I got home and immediately my dad started yelling at me, “Where have you been? As if you did not know what was happening!” I replied, “What happened, dad?” He said that since morning, the radio had been broadcasting forecasts from the Meteorological Service announcing a heavy rainstorm coming our way. “It’s one of those caused by El Niño, which brings very bad weather,” he said, adding, “It is important to listen to weather forecasts if you don’t want to get caught in the storm!”

So I stayed home with my parents, and I learnt about this phenomenon called El Niño. In my mother language, which is Spanish, it means little boy. The early settlers in the western coasts of South America called it like this because it hits hardest around Christmas. My mom explained that El Niño happens when the temperature of the normally cool surface water of the ocean increases during a few months. It can cause big storms like the one we had last week.

My mom said she would buy me a book about meteorology so that I can find out more. Maybe later I will become a meteorologist, and I’ll be the one warning my dad about El Niño!